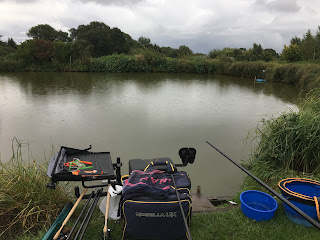 The annual Munkees vs Shandies at the Glebe which is a 3 day event organised by Sconey is another highlight of the the angling year.  I had missed Day 1 due to work commitments however Yidcarper (Ian) kindly took my place.

The event over 3 days is fished as follows, Day 1 - Teams of 4v4, Day 2 - Teams of 2v2 and Day 3 is 1v1.  Points are allocated for the team each day which group is victorious across those days rolling up to the final Munkees vs Shandies team scores.

The Draw
Everyone at the draw didn't want Pool 4 as it wasn't fishing that well, even Pete Bailey had a nightmare on it the previous day with only 25lb of fish... this wasn't going to be the end of Pete's Pool 4 adventure either.

I was the first to draw and had the choice of all the envelopes on the table.  The lads were all chanting, "Pool4, Pool 4...".  Opening the envelope I had took my folded up peg and opened it.  Pool 4, Peg 75!

Hathers had predicted it as I've been on this peg twice before on last years Munkees Shandies.  Poor old Pete Bailey also drew on Pool 4 again... much to the amusement of the rest of the lads.

Set-up
I was a little dejected as I'd not had a good performance from this peg, despite it being an end peg.  Luckily I had Andy Gregory for company so at least I'd be guaranteed a laugh.

I was in two minds whether or not to grab the pellet waggler rod out however, Andy Day who I seem to follow around the place the previous day didn't have much success on it, so it stayed in the bag.

My thinking was, feeder to the far bank, bomb and pellet 3/4 overs.

Bait was sweetcorn, pellets (micro for the feeder, 6mm and 8mm), casters and some dead reds together with a batch of groundbait.

All-In
A quick look on the short pole line for the first 15 minutes to try and bag a quick carp produced nothing, so it was straight onto the feeder line.  First cast was a little off target however it didn't catch a squirrel and the bite was almost immediate.  First fish on soon to be followed by the first fish lost!

The next 30 minutes I tried that feeder line and it produced nothing.  I had also been pinging some 8mm pellets during that time.  I remembered what Neil (NS69) said to me last night.  He had felt that he'd stayed on one method too long before trying something different.  This resonated with me and I decided to have a look in my margins, again nothing.

So, my final tactic was the good old "spray and pray", aka Bomb and Pellet.  It was to turn around my match today and unfortunately make this a bit of a boring blog entry.  The fish were on that line and for the next 3 hours I would get plenty of bites and plenty of fish much to the disgust of Andy G!

The final hour I had a few more attempts at the margin line to try and bag a larger carp.  The large carp wasn't to be however I took a few more fish out.

All-out, could I turn around my fortunes from my nemesis peg?

Result
72lb 2oz to take the section win.  Sconey beating Andy G which meant it was a Munkee win also.

Conclusion
Bomb and Pellet worked for me.  I find it quite a boring method unless the bites are pretty instant, you are sat there waiting for the tip to generally fly around.  I tried changing from a normal colour pellet to a red one however it didn't make a lot of difference to be honest.

I estimate that I'd fed around 2 pints of 8mm pellets during the day and this was pining 3-4 pellets in every couple of minutes when I could.  The fish were visible up in the water.  Should I have set up a pellet waggler?  Well, while it didn't work for Andy Day yesterday I was very pleased with my result.
Match Fishing Scene (MFS) Matches Munkees vs Shandies The Glebe