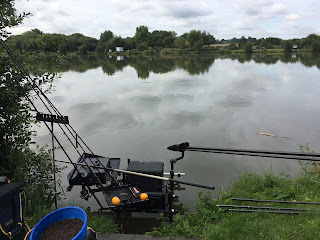 Matchfishing Scene organise a match for all the match winners during the Champion League season and I was lucky enough to win two matches this year and earn a spot of this match.  The match had been organised for the fantastic Barston Lakes near East Midlands Airport.

The Draw
Peg 46 for me.  I'd been in this area before.  On arrival at the peg it was a very tight home for the day.  The box needed to go in the water to give me some room.

Set-Up
The pole line was going to be difficult as I would have to ship the pole along the bank due to the number of walkers, runner and cyclists that go past you.

Today I felt would be more of a rod and line affair, the following were set-up:

Pole lines were set at:
Bait was pretty simple.  Sweetcorn, some worms for the margin line, dead reds and pellets (8, 6 and micro).

All-In
I fed the pole line with a few balls of groundbait and then out on the hybrid feeder at around 70 metres.  I started the stopwatch on the feeder and it took 10 minutes for the first bite and fish albeit a small skimmer.  30 minutes past and the first large carp was in the net.

Time for the pellet waggler which I would give at least an hour, hopefully the fish would be lining up after pinging pellets since the off.  First fish was obviously foul hooked as it came as I was bringing the waggler into the feed area.  I got it near the net and then it decides to ping off leaving me with a lovely big scale on the hook.

Well that hour produced nothing so I decided to try the bomb and pellet over the same line which gave me one more nice carp.

The match plan wasn't going to plan at all with very little to show for it so far.  The 14 metre pole line straight ahead was very difficult to fish with all the passing traffic so I had prepared the shorter pole line with a ball of groundbait and had been dribbling some casters in while I was on the bomb line.

Being a lot easier to fish I was surprised when the first bream came to the net all 4lb of it!  What a lovely fish it was too.  This line really started to produce some lovely skimmers and bream.  It needed topping up with another ball of groundbait once the roach started coming in and the skimmers backed off.

I'd primed the margin line on my left hand side and had spotted some tail patterns so a quick switch to the margin rig and double worm.  The float settled and shot under, the fish steamed out from the margin and the elastic was working overtime.  Another large carp graced the net.

The final hour I was switching between the short pole line and the margin, catching another carp and some more silvers before the all out.

Results
4 Carp and a nice net of silvers unfortunately gave me 55lb putting me dead last in section and losing a golden nugget to Josh and Scotty.

Congratulations to Pete Bailey on the massive win, good luck in the UK Camps!

Conclusion
Tough peg with very little room to fish the long pole.  Josh next to me had caught on a slow sinking bomb rig.  I was surprised that my spell on the pellet waggler didn't produce any fish or even when I went onto the bomb and pellet that there would be more fish in the swim.

The short pole line and margin saved me from further embarrassment at the weigh in, although you cannot get much worse than last in section!
Barston Lakes Match Fishing Scene (MFS) Matches