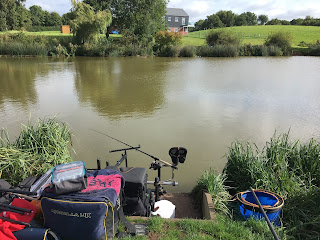 The Munkees were ahead of the Shandies and we only needed a few wins to get the overall result for the northern contingent.  The previous night we were "treated" to a bit of Twisted Biscuit, Sconey's band.  What a great nights entertainment however there was one gentleman who didn't really appreciate the music and was seen with napkins stuffed in his ears.  I missed the opportunity to grab a photograph.

The Draw
I certainly didn't want Pool 4 despite yesterdays great result.  I was more than happy when Pool 1, Peg 2 came out of the bag however, I had Peg 1 to beat which was fishing very well!

Set-up
Peg 2 is a know feeder peg and the far bank had been cleared as the gap between the reeds was pretty clear to see however it would take some good casting to plop it in the right area.  As yesterday I decided to set up the feeder rod, bomb and pellet (just in case), a 5 metre pole line and I had a pretty good margin to my right hand side underneath a tree.

All-In
I'd clip the feeder up in two places, the first in line with the reeds on the far bank and the other right in the gap in case the fish were there.  This was a top tip from Jads.  First cast, first fish... great start!  Next cast into the reeds and pulling for a break the line broke where the leader joined the mainline, not such a good start so while I was setting up a new feeder rig out went the bomb and pellet about 5 metres short of the reeds. 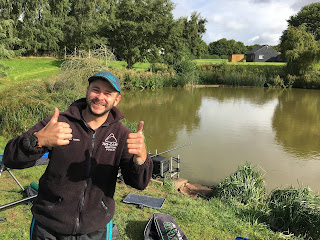 Before I had time to get a new feeder rig on, the tip went round and this was before I'd even started to ping any pellets on that line.  I managed to set up a new feeder and clip up the same as before however I lost a few fish from this line so back onto the bomb and pellet which was producing the fish just as yesterday.

I certainly wasn't feeding as much pellet as yesterday, only dropping in 3 pellets when the bite didn't occur within a few minutes.  It was only when the line seemed to die back that I went onto the short pole line which produced a few silvers for around 15 minutes which was enough time to rest the bomb and pellet line.

Neil on Peg 1 was fishing the margins shallow and pinging 4mm pellets which was producing fish however there stamp was smaller than mine.  We had been fish for fish in the first hour but I felt as though I'd definitely pulled away on weight.

The Bomb and Pellet line was producing fish and I only lost a few fish.  I'd changed the hooklength around 4 times due to the band either breaking or feeling a rough spot on the line.

I'd prepared the margin with some corn and pellets however everytime I went over it with a big worm I'd either get a skimmer albeit a decent one or a small perch.  Bomb and Pellet was were it was at and this continued all the way to the all out.

Result
120lb 3oz taking the win from Neil (Drawbag) and gaining a valuable Munkee point for the team plus it got me 3rd on the lake for a brown envelope pick up!

Overall the Munkees retained the overall win whooping the Shandies this year!

Conclusion
Again the bomb and pellet produced the goods and it was a better day than yesterday as I wasn't hanging around for the bites.  Andy Kinder mentioned that I could have increased my weight if I'd have stuck to the feeder line but I'd opted for an easier method as I was concentrating on beating Neil and not winning the lake.
Match Fishing Scene (MFS) Matches Munkees vs Shandies The Glebe