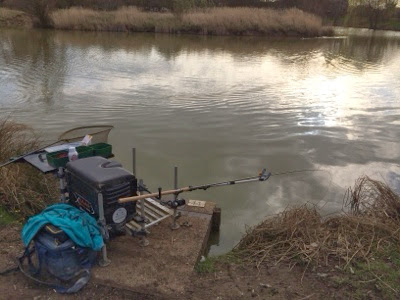 Almost a year to the day since Mark and I fished at Chestnut Pool in Biggleswade.  The weather last year was quite different to the day that greeted us today.  Lucky for me that Mark called me at 6:15am as I had overslept and ended up getting to the fishery 30 minutes late to a full car park!

Mark had picked Peg 15 and left Peg 14 for me with a great island chuck.  Graham was also with us just round the corner on Peg 17.

The Set-Up
I decided I wanted to keep things simple today and given the better weather and increased temperature opted for a method feeder rod using dampened 4mm pellets and either an 8mm or 11mm pellet banded.  I was set up in no time at all.

The All-In
We called the all-in, my first cast after I'd clipped up a couple of feet from the island was shorter than the line clip so not to spook any fish out of my swim and around the island.

The first 5 minutes there were no signs of activity and then the tip started to bounce about and a sharp pull brought the first skimmer to the net.  It was a decent fish of just under a pound in immaculate condition.

4 casts and 4 fish the day could not get off to a better start!  I decided to cast to the island to try and search out the carp.  No sooner had the method feeder settled and the line tightened the tip flew round with a great 5lb carp.

The first couple of hours past very quickly and before I knew it I had 40lb on the clicker with a mix of carp and large skimmers.

Meantime Mark was on the bomb and pellet cone with a bollie as hook bait looking for the larger carp that reside in Chestnut Pool.  He decided to switch to the feeder given the action I was getting, the change brought him skimmers, but at least his tip was going round and fish were coming.

My best fish of the day arrived, a great 9lb Mirror carp which gave a good account of itself.  Lunchtime ticked past and the action slowed up.  I was casting along the island to search the fish out, once found they seemed to be lining up.  The rod was just settling on the rests and away the tip would go...

I broke the 100lb barrier around 2:30pm and decided to test the margins.  I put a whole tin of sweetcorn and 4 handfuls of 8mm pellets to try and attract the larger carp.  In the final hour I dropped the method over the margins and pulled out 4 large skimmers, but no carp.  We called the all-out at 4pm.

The Result
117lb on the clicker, 12 carp and the rest all cracking skimmers.  The carp average was around 5lb with the best fish for me being a 9lb Mirror Carp.

Mark had 34lb on his clicker so I've managed to tie the Mark vs Mark competition at 1 all.

Conclusion
A great day, great weather and almost none stop action.  One of the fishing lads, Alan Oakes mentioned on my Facebook page that in the summer time, 100lb of skimmers is needed to frame in a match... I can well believe it.  We will be back in the summer to see how the sport is then!