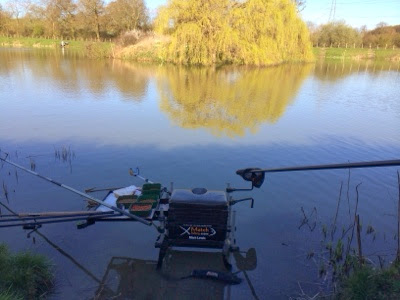 We had the choice of either Gold Valley or fishing the large lake, otherwise known as "Top Lake" at Lake John Fisheries and opted to head out to Waltham Abbey.  Lake John opens quite early and we arrived at 7:30am.  It was a lovely day with some gusting breeze that was giving the water a good ripple.

As we were 1 all in the mini competition a coin was tossed to decide who has the choice of swims, Mark won.  Walking round to the left handside of the lake Mark picked Peg 34 which had a chuck to the island, so my choice was either a peg which only had open water (Peg 33) or chuck to the large overhanging willow (Peg 35).  I chose the Willow peg.

The Set-Up
The reports from Lake John mention good silvers sport together with some larger carp so my attack would be two pronged with a feeder line to the over hanging Willow and a Pole line at the base of the near shelf which was about 8 metres out.

Bait for the day: Maggots, Pellets and Sweetcorn.

The All-In
I decided on a positive approach on the pole line so feed a few balls of groundbait and pellets on the pole line which would 'cook' for a couple of hours in the hope of some of the lakes larger skimmers and proper bream.  While that swim 'cooked' I went out on the feed with either a 6mm banded pellet or hair rigged piece of corn.

The day started with a reversal of roles from the Saturday with Mark bringing a fish in straight from his first cast and continuing to catch on subsequent casts.  My first fish arrived after around 15 minutes, a nice skimmer taken on pellet.  This trend would continue throughout the day.

Mark was catching at a regular rate and I wasn't, so after an hour I decided to check the pole line.  Using a 6mm expander the skimmers were coming but they were not of the size that Mark was picking up on the feeder line.

As the day progressed Mark's feeder line was getting stronger and the skimmers were turning into proper bream!  My lines were still producing small skimmers and the odd roach.  Some fish were taken up in the water while laying the rig in.

Today also saw Liverpool playing Manchester United, now Mark and I are pretty social while fishing together so I have to mention his 'ignorance' and 'anti-social' behaviour plugged into his phone not listening to anything I was gabbering on about.  Every now and again I would here, "get in" when Liverpool was awarded a penalty.  I thought it was a big fish!!! A good win for Liverpool all round and I don't even follow football!

We called the all-out at 4pm by which time it was clear that Mark had won todays match.

The Result
17lb on my clicker and Mark had almost doubled my weight with 35lb on his clicker.

Conclusion
Swim choice is paramount!  That chuck to the island gave the advantage on the feeder line.  My peg with the trees was a good three rod lengths short of the island which I think made the difference.  Interestingly we didn't encounter any carp today...

The old saying goes, "you pays your money and take your lot!".  Well fished Mark, back in the lead after a great weekend! 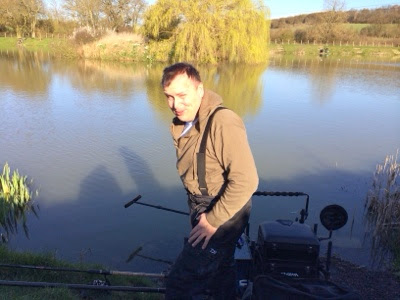